Notes from the Director

As the title of the concert suggests, all of tonight’s works were written by women. While it would be ideal to normalize this fact by not drawing attention to the uniqueness of the programming, it is arguably necessary. When researching repertoire for this academic year, I became keenly aware of the fact that nearly every program I've seen from institutions around the U.S. have been comprised entirely of male composers. While perusing the usual sources of sheet music, it is clear why--much of the standard published canon is such.

We've made the decision to dig deeper into the percussion repertoire to find works that should be performed but for a myriad of reasons, are underrepresented. We are also interested in emerging composers, unpublished/self-published works, and pieces written by non-percussionist composers.

The chamber percussion repertoire has expanded dramatically in less than 100 years and will continue to flourish with the commissioning, encouragement, and programming of a diversity of composers. In our little slice of the percussive universe we look forward to doing our part.

Tonight’s set-change music is from Caroline Shaw’s 2013 Pulitzer Prize-winning composition, Partita for 8 Voices. The composer is heard singing on this Grammy-award winning recording with her a cappella contemporary ensemble, Roomful of Teeth.

Round for Three Muses

Andrea Clearfield is a Philadelphia-based composer with connections to our region. She regularly composes at retreat centers in Taos and throughout Northern New Mexico as a fellowship recipient of the Wurlitzer Foundation. A champion of collaborative and multi-disciplinary works, she’s the host of Salon, a concert series held in Philadelphia, Taos, and throughout Colorado. In its 31st year, this concert series features contemporary, classical, electronic, dance, multimedia, and world music. Additionally, Andrea is a scholar of Tibetan music and has done extensive ethnomusicological fieldwork in remote regions of Nepal. This influence may be heard in aspects of tonight’s performance.

Round for Three Muses was inspired by a poem by David Wagoner "Round for the Muses" quoting Picasso, "to draw you must close your eyes and sing," the poem "Heartbeat" by Rainer Maria Rilke, and the ancient Greek Muses. The piece is a cross between a concert work and a performance art piece, where the performers play their instruments and speak, sing, and move.

The piece is structured with an introduction and three continuous movements loosely associated with the three ancient Muses:

We received special permission to perform this new work from the composer and the commissioner, Yun Ju Pan. Round for Three Muses was officially premiered last week at the Percussive Arts Society International Convention. Sophomore Delaney Armstrong, percussion performance major and vocal minor is the soloist and is joined tonight by senior music education and percussion performance majors Andrew Naughton, Dryden Hill, and Kevin Johnson.

Chou Xi –literally translated clown’s role– is inspired by the traditional Chinese Peking opera. There are five general categories of characters in Peking opera, Chou is one of them. The role of Chou is in general a mood changer and performs in between the scenes and other characters. Because of the humorous speaking dialogue and a lot of funny body movements, when Chou is on the stage they are always accompanied by different kinds of percussion instruments. In this piece, I use elements of Peking opera to represent some of the movements of Chou.

To contrast the bombastic nature of Chou Xi, Settle is a contemplative work with minimalist instrumentation and composition. Written by New York-based composer, producer, improviser, and contemporary music record label founder Sarah Hennies, the piece never exceeds a moderate dynamic, tempo, or texture. Realized in three sections, the performers are to use a timer to institute each change in mood. In place of a physical timer, tonight’s performers will take their cues from light changes.

Opportunities for student composers to work with an ensemble to have their work performed is of value to the Adams State Department of Music. Miranda Johnson, a senior composition major, wrote Mystification for the ensemble as a composition project and provided our students a chance to prepare a piece on limited rehearsals. Delaney Armstrong, Jeslyn Dees, Dryden Hill, Kevin Johnson, and Andrew Naughton perform tonight’s premiere of Mystification.

Caroline Shaw is the youngest winner of the Pulitzer Prize in Music and is a Grammy-winning singer with the ensemble, Roomful of Teeth. Trained as a violinist, she performs with the American Contemporary Music Ensemble, Alarm Will Sound, and numerous other contemporary music and dance ensembles. As a singer, she’s performed with a diverse group of contemporary chamber and popular ensembles, and she can be heard on Kanye West’s 808’s & Heartbreak and The Life of Pablo.

Her compositions have been commissioned and performed by large ensembles and chamber music groups alike, including the Cincinnati and Baltimore Symphonies, the Brentano String Quartet, and the New York City based and award-winning quartet, Sō Percussion. Taxidermy was composed for Sō and premiered at Princeton in 2012. Caroline writes about her work:

Why Taxidermy? I just find the word strangely compelling, and it evokes something grand, awkward, epic, silent, funny, and just a bit creepy — all characteristics of this piece, in a way. The repeated phrase toward the end (“the detail of the pattern is movement”) is a little concept I love trying (and failing) to imagine. It comes from T.S. Eliot’s beautiful and perplexing Burnt Norton (from the Four Quartets), and I’ve used it before in other work — as a kind of whimsical existentialist mantra.

A special thanks to Ruthie Brown at the Green Spot for the use of the 12 clay pots needed to perform Taxidermy. We were given the opportunity to test her inventory of plant pots for the necessary pitches for tonight’s performance.

German-American composer Johanna Beyer was associated with the experimental composers known as the “West Coast School.” This group of composers, considered modernists and based primarily throughout California and Washington, were led by notable composers Henry Cowell (whom Johanna was a student), John Cage, and Lou Harrison.

March for 30 Percussion Instruments is a quirky piece in that is written in 4 ½/4 time instead of the traditional marching meter of 4/4 time. Thus, an asymmetrical pulse is felt by the listener. Traditional percussion instruments, found instruments, and unique instruments are scored in the composition. Written in 1939, this piece was conceived in the same decade as the percussion ensemble’s first true work, Edgar Varèse’s Ionisation (composed in 1931and premiered in 1933).

Percussion Opus 14, also composed in 1939,is a colorful work constructed around a rhythmic ostinato performed on a single timpano. Both works are traditional in nature and historically relevant to what is an otherwise young medium—the percussion ensemble.

We found it appropriate to conclude this evening’s concert with all seven performers paying tribute to Johanna Beyer’s often overlooked pioneering work. 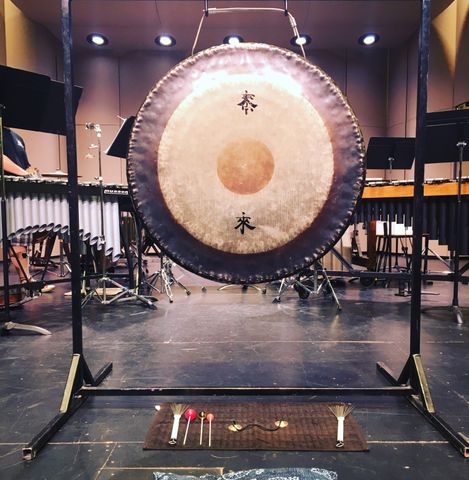